Australia is one of the leading countries in the world when it comes to reducing rates of cervical cancer in women, with current projections showing it could eliminate the cancer by 2035.

However, the statistics hide the fact that Indigenous women are being left behind – not just in Australia but in other countries that have a history of colonisation and marginalisation of Indigenous populations.

Researchers are warning that, unless current inequities are addressed, Aboriginal and Torres Strait Islander women will continue to be left behind when it comes to screening for the disease, and in treatment and survival rates.

HPV is a common sexually transmitted infection and is responsible for almost all cases of cervical cancer.

Associate professor at the Australian National University and Torres Strait Island woman Lisa Whop is a lead researcher in the area, and says empowering community controlled medical services is crucial to addressing the inequity.

The report found several facilitators that can overcome barriers to screening, which include openly talking about screening, trusting relationships with health professionals, and overcoming logistical barriers and privacy concerns.

Currently only about a third of Aboriginal and Torres Strait Islander women are participating in cervical screenings, according to the Cancer Council of NSW.

“Although Australia population-wide will achieve the elimination threshold, which is four cases per hundred thousand, that won’t occur for Aboriginal and Torres Strait Islander women unless we have concerted effort on addressing that inequity.”

“We have lots of opportunities to intervene in the progression of cervical cancer but currently, and that’s what this research has demonstrated, that is not happening for Aboriginal and Torres Strait Islander women.

“We need a culture shift of not accepting status quo of inequity. We need to urgently remove these inequities and eliminate cervical cancer in Indigenous women.”

Ashlee Williams, 32, is one of those women for whom intervention was almost too late.

The mother of two, and a proud Wadi Wadi, Wandi Wandian and Dharawal woman, was diagnosed with stage three cervical cancer in 2015.

In the two years prior to that diagnosis, Ashlee said she knew something was wrong, but was turned away repeatedly by GPs.

“I got told I’m being a Google doctor, that I’m too young, that I should just relax,” says Ashlee.

“There was something not right. In my gut I just knew that I had to get other opinions.”

Ashlee reached out a specialist in late 2014 after she began feeling more lethargic and was bleeding heavily. The specialist immediately sent her to the Royal Prince Alfred Hospital in Sydney.

Ashlee had an aggressive 5.8 centimetre tumour on her cervix walls, which had already begun to spread into her lymph nodes and cervix.

Following a secondary PET scan, she was told the cancer was worse than they first thought and the possibility of her surviving until Christmas was “quite slim.”

Following an intensive period of chemotherapy and radiation treatment Ashlee is now in remission, and is sharing her story in the hope of encouraging more Aboriginal and Torres Strait Islander women to talk about their cervix health.

“I feel like this could have been prevented if we spoke about it. Talking about our cervixes and getting pap smears is an uncomfortable topic and we need to make it not uncomfortable.”

Associate Professor Lisa Whop says one of the “really exciting developments” in the area is “self-collection.”

“That means women who are overdue [for a cervical cancer screening] are actually eligible to do what we call a ‘self collection’, so they can do their cervical screening on their own, which really helps to overcome some of those barriers around shame and safety.

So that’s really exciting and for me personally I think that’s a game-changer.”

She says the criteria for being eligible for self collection needs to be expanded.

“I think it’s too restrictive. Currently if you’re over 30, if you’ve never had a screening test or at least two years overdue [then you are eligible].”

“The community members I’m aware of who have been diagnosed have been at a younger age, well under 30, and I think that’s something that needs to be considered when it comes to meeting community needs.”

“I think that’s across the board when it comes to health and wellbeing across Australia. We’ve got systems in place that aren’t designed to support Aboriginal people to start with, so it’s about unpacking that and decolonising that.” 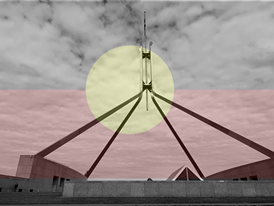